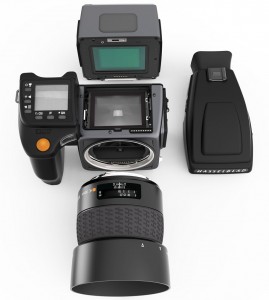 Hasselblad has pulled back the curtain on a new line of medium format camera systems.

The H6D range has been completely rebuilt with new technical components and an all new electronic platform, the company says. It will be compatible with the firm’s H lenses.

The 100c will offer 16-bit color and up to 16 stops of dynamic range. Native ISO range will be 64-12,800. (Hasselblad hasn’t yet indicated whether it’s using the same Sony CMOS sensor that was first introduced in the Phase One XF IQ3 100MP back, but the specs are identical so it stands to reason the sensor is the same.)

The 100c will also record 4K video at 3840 x 2160 in Hasselblad’s proprietary RAW video format, though frame rate and codec weren’t disclosed. Other highlights include:

Hasselblad says the 50c will have a still photo capture rate of 1.7-2.3 fps. It has yet to publish the spec on the 100c’s capture rate.

Details on the updated camera body weren’t immediately available, but judging from the images released by Hasselblad, there’s a top display screen and a more pronounced handgrip.

Hasselblad is also releasing an updated line of lenses to support shutter speeds up to 1/2000 sec. The new, faster lenses will wear an orange marking to distinguish them from the older versions.

There are no comments